Arsenal’s worst start in their 118-year history as Chelsea make the light of them in front of a full Emirates stadium. 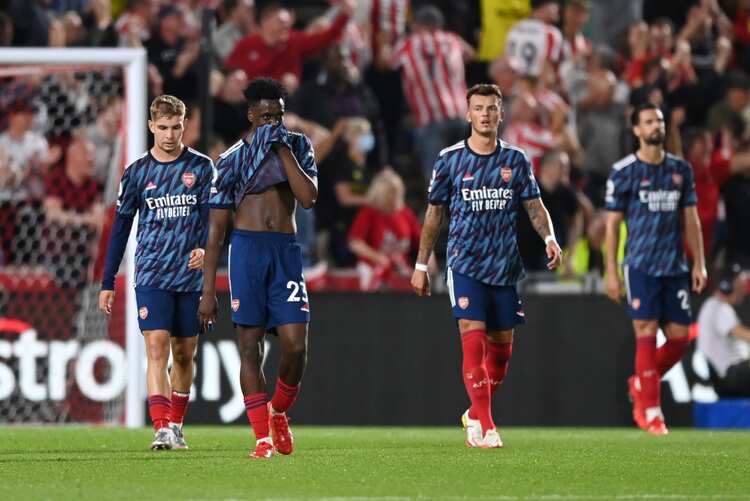 Arsenal decided to invest in young players this season, definitely trying to go back to youth policy like most clubs are doing presently, but a mixture of the young and experienced would have done the magic for Arsenal but rather they decided to go the other route, there was no marquee signing for them except for Odegaard that was bought permanently from Real Madrid.

Mikel Arteta’s side suffered a horrible evening as a well-prepared and experience Chelsea side showed them no mercy. The current European champions under the tutelage of the German tactician Thomas Tuchel stormed the Emirates and added salt to injury on the Gunners.

Arsenal suffered an embarrassing defeat in the hands of newly-promoted Brentford, and all could not but look good for coach Mikel Arteta before Chelsea decided to pile on the pressure. Arsenal has suffered their second straight loss at the beginning of a new season making it their worst start to a premier season in their 118-year history. The 2-0 loss to Chelsea made it their worst start to a premier league season.

Arsenal was definitely not prepared for the game against Chelsea with the way they played, the stadium was packed to the brim, fans hoping their club would turn on the heat on Chelsea owing to the fact that they were defeated by Brentford, but the reverse was the case for the Gunners fans as they left the stadium shattered and devastated.

Arsenal put on a lackluster performance in front of their fans and it was like a training session as Chelsea showed class. The first goal came in the 15′ by Romelu Lukaku, the former Inter man slotted in the ball from a Reece James square play, the ball beating the out rushing Leno before meeting a tap in from Lukaku to take a one-goal lead.

The second goal came in the 35′ by the provider of the first goal in Reece James. A crossing by Alonso that was dummied by Lukaku was beautifully placed by Reec Jame completed the raid on Arsenal, making it a routine win for the Blues. The loss to Chelsea has sparked a whole lot of criticism from Arsenal fans worldwide doubting if Arteta is the man to take them to the promised land.

Fans gathered outside surrounding Arteta’s car, they could be heard telling the Arsenal coach to leave, others asked what type of display was that. Arsenal legend Ian Wright has joined in the criticism, when asked if Arsenal had improved since after the match at Brentford, the legend replied stating “they have not at all especially coming off the Brentford game that was much disappointing.”

The Legend continued, “If you look at the way played today against Chelsea, it is either the players are not listening or they are not playing the way he wants them to play.”

“The only shining light in the match for Arsenal was the new boy Albert Sambi Lokonga, he was the only one that came to the party, while all others played below par.”

“From what I saw today, Sambi Lokonga was the only player thought to be okay, and also Nicolas Pepe that was here and there. The manner in which they penetrated our defense was frightening, I wonder what the tactic was, it was scary.”

Arsenal allowed Reece James to have a field day by running Chelsea’s right flank, his onslaught forced Kieran Tierney backward and he was without support, and that was evident in the goals created and scored, as both goals came from the right flank. Bukayo Saka was not in the game and was allowed to play for 61′ before being substituted by Pierre-Emerick Aubameyang, Saka did not track back for Tierney throughout his stay on the field, he did not create anything going forward, and still, Arteta was hoping a miracle would happen by him.

Tactically, Arteta was beaten and schooled by Thomas Tuchel. Chelsea’s new man Romelu Lukaku made it seem like hell for both Pablo Mari and Rob holding through out, they found it very difficult to mark the Chelsea man, they actually failed to do their due diligent on Lukaku.

Arteta will be hoping to turn Arsenal’s form around in their EFL Cup match away at West Brom on Wednesday night.