The sky is blue but North London is red as Mikel Arteta and Arsenal defeat Tottenham in the North London Derby. 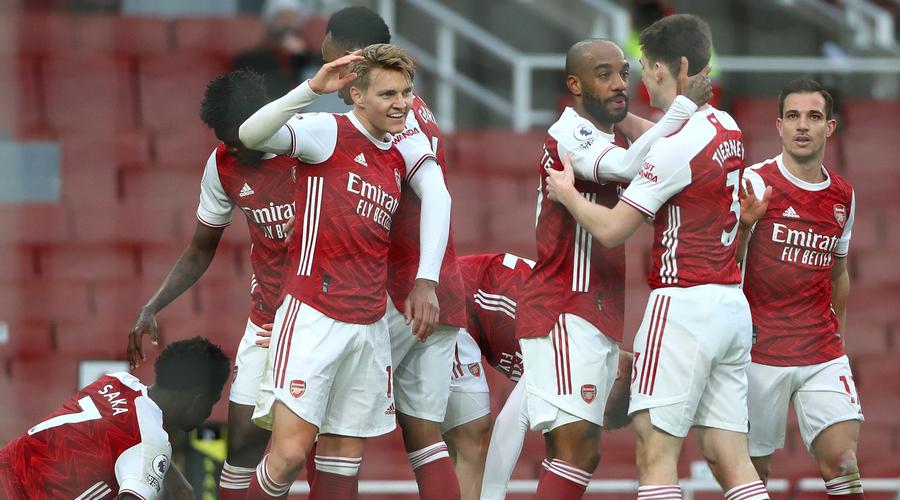 Certainly, the sky will always remain blue but the Gunners have ensured North London stayed red as they made a come back to beat Jose Mourinho’s men.

Jose Mourinho has an outstanding record over Mikel Arteta as long as head to head is concerned, in eighteen meeting, Jose Mourinho has been beating just once. It has been very difficult for the Gunners boss to beat his rival as a coach and even as a player.

Arsenal started the game without their talisman Pierre-Emerick Aubameyang, the captain was confined to the bench for showing up late. The decision was a bold one from Mikel Arteta, this is not the first time  Aubameyang will be coming late to a match. This time he met the wrong side of the coach who replaced him with Lacazette in attack and handed the captain’s armband to him. Who knows what would have happened if they had lost to Tottenham, what would have been the reaction of the fans with the decision to leave their captain on the bench, fortunately, for Arteta, the thoughts of all that coming to live did not happen.

The game however did not fail to come with its own controversy as a penalty was awarded to the Gunners controversially by Michael Oliver and it stirred the entire punditry, from BBC to SUPERSPORT, with various pundits giving their own opinion concerning the decision of Michael Oliver.

Spurs started the game very poorly. There was no bite from the attacking trio of Harry Kane, Son, and Gareth Bale, as a result, Arsenal had a free field day as they pressed Spurs for an opening goal. Teenage sensation Emile Smith-Rowe came close to opening scoring for the Gunners as he struck the crossbar from 35m unmarked in the 16′, the ball completely beat Hugo Lloris but was unlucky not to go in.

Arsenal dominated the first half with Spurs making no significant threat. Son Heung Min was substituted in the 19′ from what appeared to be a hamstring injury as he was seen holding his thigh.  Son was replaced by Erik Lamela and the game continued. The ball possession was 77% in favour of Arsenal against 23% Spurs.

The deadlock was broken in the 33′ as Spurs tried creating something out of nothing, from Sergio Reguilon’s cross, the ball fell to Luca Moura that in turn left the ball for the incoming Erik Lamela, with almost an impossible angle as a left-footer to strike the ball, and to the greatest surprise of everyone, Lamela pulled off a rabona that completely beat the duo of Oedegaard and Thomas Partey that was in front of him, the ball also beating Leno to make it a goal to nil against Arsenal.

Sergio Reguilon jubilated in a cartoonlike character fashion by holding his hand to his head in awe of the goal, he was not the only one in awe of the goal as even pundits have called it one of the best goals of the season. The rabona pulled off was one that no one expected not even the goalkeeper as he was beaten completely.

Arteta’s decision to punish Aubameyang showed he has a very strong sense of discipline and character. Despite one goal down the gunners continued to press Spurs and it paid off eventually as Kieran Tierney made light work of Matt Doherty to square the ball into the 18-yard box of Spurs, which was lashed onto by Martin Oedegaard, the ball was not with enough power but deflected off the legs Toby Alderweireld beating Lloris to make it one all for the Gunners.

The likes of Harry Kane and Gareth Bale were not in the game as they started the second half, not in a convincing manner but was not as bad as the first half. Mourinho noticed this attitude from is front line and he sacrificed Gareth Bale for Moussa Sissoko in the 59′, leaving Lucas Moura, Harry Kane, and Erik Lamela upfront.

Nicolas Pepe started the second half for the Gunners as he replaced Bukayo Saka. Pepe’s impact was not felt that much in the game till he played a one time through ball to Lacazette that played him on and left Davinson Sanchez chasing the striker. Lacazette got to the ball first but fluffed the ball before Davison Sanchez lounge caught his leg in the box, which sent the Gunners captain rolling on the floor. Michael Oliver could be seen pointing to the penalty spot, while Davison Sanchez was on the floor with his hands raised in innocence, but Michael Oliver’s hand was already pointing to the spot. The referee could be seen communicating with the VAR before he finally awarded the spot-kick.  Alexander Lacazette who was in place for captain Aubameyang stood over the ball and sent Hugo Lloris the wrong way while slotting home the ball to make it two goals for the Gunners.

The decision by referee Michael Oliver was the talk of the day as many fans and ex-players agreed that was not a penalty, unfortunately, the penalty had been given and the ball scored. The VAR has come under serious controversy of late with many coaches calling for it to be properly regulated and structured.

Erik Lamela was scored a wonderful goal, but unfortunately for him, he was sent off. His first yellow card came on a late tackle on Thomas Partey in the 69′ and he was cautioned. One would think a player that has been cautioned will start to take things easy, but that was not the case for Lamela, he continued playing with high intensity like one that has not been booked, only for him to land in hot waters, this time he elbowed Kieran Tierney right in front of his coach and Michael Oliver did not hesitate in showing him red, and that left Spurs with 10 men and also disrupted Mourinho’s game plan.

Spurs turned up after the red card to Erik Lamela, as they started pressing Arsenal for an equalizer. The best moment of the encounter for them was the last ten minutes, the way they played in the final minutes was better than the entire time they played throughout the game.

Harry Kane got on to an inswinger with his head that completely beat Leno to make it an equalizer for the visitor but the goal was well caught by the linesman, and it showed the same from the video replay. The goal was disallowed, but that did not stop Spurs heavy pressing to get one back before the final whistle.

Again, Harry Kane was carelessly tripped by Thomas Partey in the 89′, and a freekick was given. Kane hit the freekick from a distance and surprisingly, Leno went the wrong way before returning but he was quite late as the ball rattled the upright to deny Harry Kane of an equalizer, the ball bounced out and Davison Sanchez hit it back but was blocked this time by Gabriel as the ball was cleared to safety for the Gunners. Harry Kane still had the last chance at goal as he shot wide, making the Gunners winners of the evening.

Michael Oliver blew the final whistle and Arsenal is the winner. After the match, the duo of Lacazette and Mikel Arteta were interviewed and they had this to say.

Lacazette, ‘ I was lucky to be awarded the penalty and it felt good scoring from the spot and winning this crucial three points for us and for our fans .’

‘Lately, we have had the problem of closing games, we suffered during the closing stage of the game as we could not contain their pressure despite them being a man down, this is an area where we are going to be working as we need to comfortably seal off games and not struggle the way we did today.’

Mikel Arteta when questioned about his decision to leave Aubameyang out of the squad, he had this to say, ‘Auba is a very important player for us, it is a pity he did partake in the match, there are certain ways we are supposed to behave as a team, and we must learn to respect each other.’

When asked what penalty he would face, the coach declined and said he will never say details of what happens inside his dressing room with the press.

At the other end, Mourinho was quizzed about Michael Oliver’s decision to award a penalty to Arsenal and the special one asked, ‘ Do referee’s get interviewed? the interviewer answered no, he responded that’s very bad, he asserted that there is no way that would have been a penalty, he concluded that he has never been lucky with Michael Oliver.’